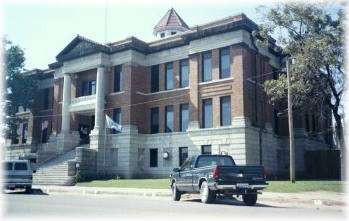 Adjacent to the Courthouse is the War Memorial Park. The first stone was set in 1950 by the Newton Martin McKellar Post Number 101 of the American Legion, the Nowata VFW Post Number 2745, and the County Commissioners. It was originally dedicated in the memory of the Nowata
County military personnel who died in WWI, and WWII. In 1990, the La Ke Kon Club sold 500 bricks and bought stones for memorials for those who died in the Korean and Vietnam wars.

Things to do Historic Courthouses near Nowata, OK