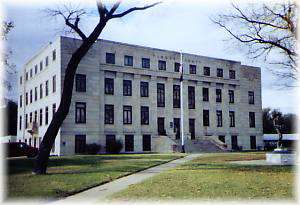 The first courthouse in Finney County was built in October, 1885, at this location. The county soon outgrew the small building and in 1902 was moved to a larger building at 113 South Main Street until the present courthouse was built in 1929.

C.J. "Buffalo" Jones Statue in front of the courthouse describes highlights of Jones' life inscribed on the base.

Things to do Historic Courthouses near Garden City, KS