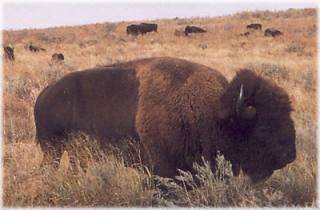 The Sandsage Bison Range is a 3,670 acre area, home of sandsage prairie biome. Not only is this area noted for its unique vegetative character, but it is also home to the oldest publicly owned bison herd in Kansas. The herd was started when the state received one bull and two cows from an Oklahoma preserve in 1924. Other animals inhabit the refuge: lesser prairie chickens, ground squirrels, quail, jackrabbits, and deer.

The range is managed by the Kansas Department of Wildlife and Parks. Tours are available by arrangement through the Friends of Finney Game Refuge and the Finney County Convention and Tourism Bureau.

If you would like more information on how you can become involved with the Bison Range visit the Friends of the Sandsage Bison Range (FOSBR).

Things to do Wildlife Refuges near Garden City, KS