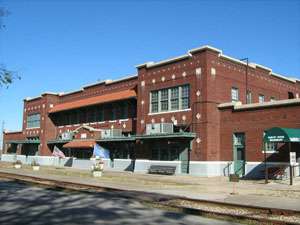 The Frisco Depot Museum built in 1914 is the third largest depot on Frisco rail lines in Oklahoma. The museum was formed when the Choctaw County Historical Society obtained control of the Frisco Depot and began its restoration in 1978. Restoration began in the Harvey House Restaurant and progressed though out both floors of the old depot. Harvey Girl quarters are preserved on the second floor. These consist of three bedrooms and a bath as well as a matron's suite. Items of local and county-wide historical interest (artifacts, documents and pictures) are currently on display along with a miniature railroad, a miniature five-ring circus and a moonshine still.

Railroading is preserved in displays of Frisco memorabilia and numerous artifacts of railroad construction and maintenance. Photos of trains, crews, wrecks, etc., abound.

Things to do Museums near Hugo, OK

Among other things, the Tannehill Museum houses an extensive collection of old and exotic weapons. Exhibits include a collect...

History buffs will enjoy this museum. ...

The old Choate House was built by a leader of the Choctaw Nation. The 1867 log cabin displays pre-statehood furniture....