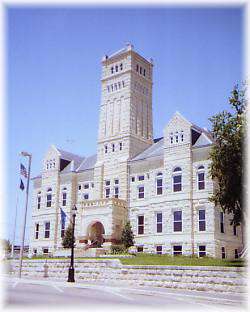 This Roman Revival building was commissioned May 20, 1899, and was completed in May, 1900 at a cost of $35,000. It was built by the firm of Ziegler and Dalton of magnesium limestone quartered in the nearby bluffs. The stone was so soft that it could be hand sawed by the German and Swedish masons prominent in this area. The architect was J.C. Holland, who designed similar courthouses elsewhere in Kansas, including those in Manhattan and Clay Center, with the Clay Center building also built by Ziegler and Dalton.

Things to do Historic Courthouses near Junction City, KS