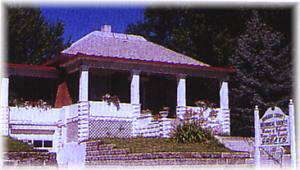 History comes alive at the historic Gruber House, which is a fine example of everyday life at the end of an age of grace and style. Built in 1908, the home reflects the charm of the Victorian era, with furnishings and decor reminiscent of the early 1900s. The house was built by St. Paul entrepreneur, Frank Gruber a Bohemian immigrant.

The house is built from the bricks manufactured at his brick factory. He also operated a hotel, bakery, and a restaurant. The house is modest in size, and was not one of St. Paul's elaborate homes. After renovation was completed in 1996, the house provided the perfect backdrop to display some of Howard County's finest treasures: beautiful furniture, glassware, china, clothing, toys, and musical instruments.

One can almost hear the player piano playing, the smell of homemade bread baking, and the other sights, sounds, and smells which were typical of that period.

The lower level of the Gruber House is home to the Museum of Nebraska Baseball Greats and Howard County Military displays.

Things to do Famous Homes near St. Paul, NE