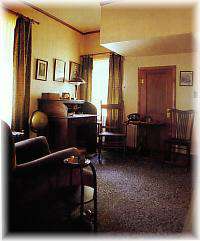 Built in 1886, the Senator George W. Norris Home is both a state and national historic site focused on the history and vision of Senator George Norris (1861-1944). The Home is listed on the National Historic Register.

Norris was one of the great independent politicians of American public life in the early 1900s. The establishment of Nebraska's unicameral legislature (the only one-house legislature in the U.S.), and landmark legislation such as the Rural Electrification Act and the Tennessee Valley Authority, were chiefly the result of his efforts. He represented Nebraska for forty years in the U.S. Congress, as a representative (1903-13) and as a senator (1913-43).

The house was built in 1886 and purchased by District Judge George W. Norris and his wife, Pluma, on Nov. 29, 1899. Pluma died in 1901 following the birth of their third daughter and Norris married Ella Leonard in 1903. Shortly after the turn of the century, Norris remodeled the house and added indoor plumbing. By 1910, electric lights and a furnace were in use.

Senator Norris completed major remodeling in 1931, reportedly as his own private relief project during the Depression. The double garage was also built in 1931.

The steep tiled roof, stucco exterior and half-timber trim greatly changed the outside appearance. The brick fireplace and sunroom were added and the roof raised a half-story. A wider staircase was added in the new entryway and the previous narrow stairway became the pantry between the kitchen and study. There were now three large bedrooms upstairs, each with a full-sized bathroom.

The home has been magnificently preserved along with the furnishings and appliances that were used when the home was occupied by the Senator and his wife. As you walk into the home, one of the first things you will notice is the beautiful interior woodwork.

A proud portrait of the Senator is mounted above the fireplace in a living room full of antique furniture and books. The study features a wooden desk with the Senator's spectacles and writing instruments laying out as if he was just sitting there. A fabulous 1937 black Buick with a straight-8 engine and suicide doors is still parked in the garage.


Come visit us in McCook, Nebraska

The McCook Library, listed on the National Historic Register

Featuring 250 beautiful acres on the west edge of McCook that plays 18 holes to one of the hardest course and slope ratings in the state with a Par 72. Visitors agree that it is one of the most challenging tests of golf ever experienced. Heritage Hills is ranked "One of Golf Digest's Top 75

Authentic pioneer artifacts from the 1870

A landmark of its own, downtown McCook is lined with striking architectural designs. Each building is rich in its own history, providing an enjoyable atmosphere reminiscent of the times in which McCook experienced its booming growth.

To McCook calendar of events

Things to do Famous Homes near McCook, NE