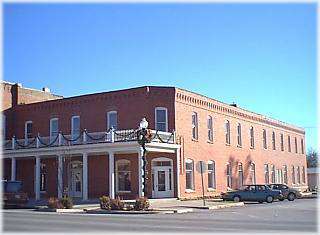 Because of its historic downtown, Neodesha was selected as a Kansas Main Street City in 1993. The occidental Hotel, later owned by Carrie Brown, was then renamed the Brown Hotel. The wooden hotel was destroyed by fire in 1895. Carrie rebuilt this fine brick hotel in 1896 and added the verandah in 1905.

The building in currently being restored to be used by a private business.

Other buildings on the tour include the old City Building which was built after the city was founded in 1871. The original building had a stairway up the middle to the "opera house." The upstairs also once held a roller skating rink.

The "Hull" building was built in the 1904 era. The buff brick used to build most of this building came from Buffville, north of Neodesha. This was the site of the first telephone office.