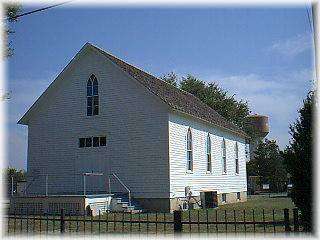 The Mennonite Brethren Church is one of several distinct denominational families within the larger Mennonite/Anabaptist faith tradition. It was organized in russia following a spiritual revival among Mennonite villages in 1860.

As a landmark, the Historic Mennonite Brethren Church serves as atypical example of the one-room meetinghouses scattered across the prairies at the turn of the century. with its elegant simplicity, its plainess and its white exterior, it brings to mind the westward expansion of the Christian church across the prairies. It featured a roman arched ceiling aswell as Roman arched windows. The first permanent pump organ was added in 1906. During its move from a farmstead southwest of Hillsboro, much care was taken to remain faithful to the old structure, particularly on the main floor and balcony. Step inside the quiet, inviting sanctuary for a reflective moment or two.

Directly to the east of the Historic Church lies the Hillsboro Mennonite Brethren Church Cemetery, where many of the original church members were laid to rest.


Come visit us in Hillsboro, Kansas

The Kreutziger Schoolhouse reminds us of the early education on the Kansas prairie, 1886-1960. Today the bell tower, the desks and the stove show how one teacher taught eight grades with an average of from 20 to 30 students.

The three-story Olde Towne building was completed in 1880, a year after Hillsboro was founded. It was restored in 1887. Over the years, the building has housed a bank, hardware and dry goods store, apartments on the upper floor, and egg processing plant. The building was vacant in the 1960

The Mennonite Settlement Museum celebrates the thousands of immigrant Russian and Polish Mennonites who settled in western Marion and eastern McPherson Counties in the early 1870s. The museum includes: The historic Peter Paul Loewen House

Reflective of a prosperous midwestern family in the early years of the century, this home of Lutheran immigrant, William F. Schaeffler from Germany, was constructed in 1909. Part of the reason the house is now a museum could be attributed to its "modern"

To Hillsboro calendar of events

Things to do Historic Churches near Hillsboro, KS