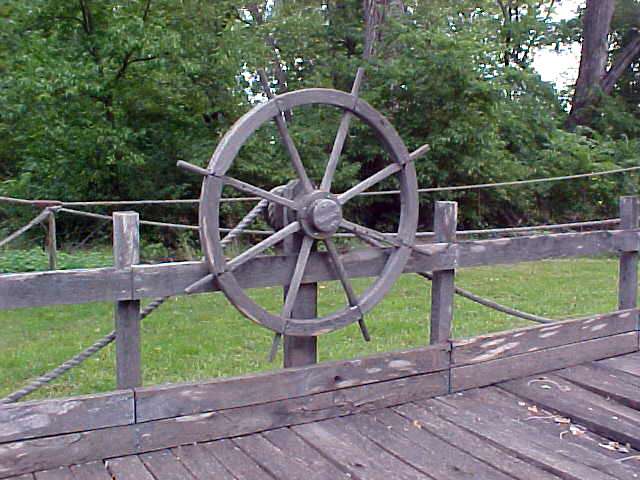 Historic Trails Park recognizes the Trails that merged at this point because of the ability to cross the river on the ferry. Trail traffic often crossed a low water ford north of this park bringing westbound travelers through this very spot on the south bank of the Blue River. Marshall's Rope Ferry operated further up river. Often hundreds of wagons with thousands of pioneers camped for days waiting their turn to cross. Pioneer death from illness was common and diaries tell of many graves near the crossings.

A replica of the ferry used by pioneers, Pony Express riders, and other travelers sits in the park. A rope crossed the river above the ferry which rode a pulley back and forth. By turning the wheel, another rope would shift the ferry into or away from the swift river current, pushing the ferry across the river.

Emigrants were the first to cross the Blue River at Marysville on the original Frank Marshall Rope Ferry between 1851 and 1854, until a bridge was built. Costs were $5 per wagon and $0.25 per head of livestock.

Contact the Marysville Chamber of Commerce for directions to the park.

Things to do Pioneer Life near Marysville, KS