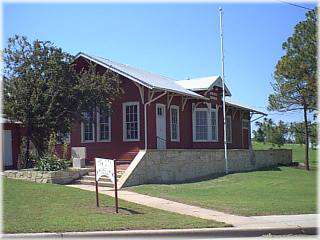 The Kaw City Museum was established in the railroad station of "old" Kaw City when the depot was moved from the old town site to the new location on the hill overlooking the Arkansas River valley.

The depot was finished in 1903 by the Eastern Oklahoma Railway Co. It was the "finest station of the line, giving ample accommodations for the extensive freight business" which included shipping corn and other farm products as well as cattle. It was in a rich agricultural area and the gateway to the Kaw and Osage reservations. In later years, the railroad moved oil field equipment into the area as the fabulous Burbank Oil field came into being. The station was subsequently taken over by the Santa Fe Railroad.

The original town of Kaw city was covered by the waters of Kaw Lake in 1975. The Santa Fe Depot was the only business building moved from the old town to the new location, two miles to the west, up on a hill which looks over Kaw Lake on three sides. The depot is now listed on the National Register of Historic Places.

In time, the artifacts in the Museum outgrew the available space in the depot. To expand the scope of the Museum facility, a large addition was built in 1995 through the generous support of Mr. Keneth Brill and others.
It is attached to the depot by means of a walkway which is paved with bricks dedicated to patrons of the Museum and citizens of both Kaw Citys. The walls of the walkway are a gallery for local elementary school students to exibit their recent endeavors.

In one corner of the original building is all the equipment of a beauty parlor, circa 1930, that reportedly was still in operation in the 1970s. Nearby is an old-fashioned bedroom that features a sturdy, homemade bed frame. In other showcases are hundreds of novelty items and simple memorabilia.

The Brill Building lately has featured an outstanding Indian exhibit from the Bert and Adele Dennison Family collection, including beadwork, clothing and photographs. It also features a collection of George Catlin early photographic prints and includes its share of Native American artifacts.

When you visit, ask your hostess about the time that future cowboy star Tom Mix borrowed $100 from Clyde Sharp in old Kaw City, then wouldn't pay him back.

The Kaw City Museum was established in the railroad station of "old" Kaw City when the depot was moved from the old town site to the new location on the hill overlooking the Arkansas River valley. The depot was finished in 1903 by the Eastern Oklahoma Railway Co. It was the "

With heavy emphasis on the history and preservation of Kaw Nation's artifacts, the Kansa Museum has frequently changing displays. The museum has recently featured some of the tribe's most significant artifacts.

We currently do not have any events for Kaw City, Oklahoma in our database. If you know of events taking place, please add the event
.

Things to do Museums near Kaw City, OK

Each community within Roger Mills County has displayed their history with memorabilia. The Veteran's Room has an unequaled...