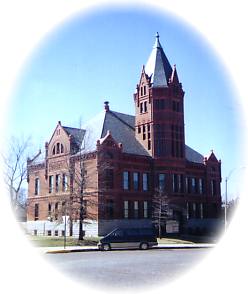 In 1851, Francis J. (Frank) Marshall of Weston, Missouri arrived at the bank of the Big Blue River. He came here to establish a trading post and to operate a ferry. On November 11, 1854, Marshall opened the first civilian Post Office in the Territory of Kansas. Marshall lent his name to our county, and Marysville was named to honor his wife Mary.

For nearly a century, this North Central Kansas town enjoyed slow, steady growth with little concern over economic pressures. Situated in the Big Blue River Valley, it became the marketing center for Marshall County farmers. This community was populated by immigrants from Northern Europe.

The Oregon Trail and Mormon Trails converged at a river crossing just south of town. Marysville became the first major station out of St. Joseph, Missouri, on the Pony Express route. One of the buildings used to stable the Pony Express horses was renovated for its historical value. Nearby is the Pony Express Museum in the Old Wells Fargo carriage barn. More than 3,000 historical momentos are kept in the museum on exhibit. It was an important stopover point on the Overland Stage Lines and the military route from Fort Leavenworth to Fort Kearny.

Things to do near Marysville, KS