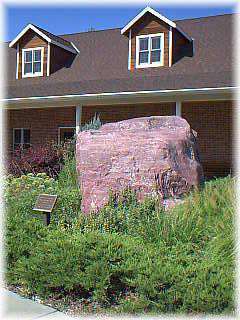 The Ox-Bow Trail started at Nebraska City, went northwest to the Platte River and then southwest to Fort Kearney. The trail was in the shape of the curved wooden yoke worn by the oxen which pulled the wagons. This trail had the advantage of easy access to water, with only one stream to ford at the crossing of Salt Creek at the Saline Ford (present day Ashland). Between 1840 and 1867, before the railroad, the Ox-Bow Trail was an important immigrant and freighter overland wagon trail and a northern "feeder" route on the Oregon-Mormon Trail.

The Twin Rocks consisted of two large rocks, which were located northeast of Ceresco. An early owner, an enterprising farmer, blasted apart the first rock before neighbors stopped him, explaining the landmark's significance. The second rock, of red Sioux quartzite, was removed in the fall of 1991 and sold to a landscaping firm in Gretna. By luck, Don Johnson, originally from Ceresco, found the rock and offered it to the Historical Society.

The Saunders County Department of Roads hauled the 24,490 pound rock from Gretna to the Historical Society Museum Complex in Wahoo, where it is inscribed and on permanent display in front of the museum.

Things to do Historic Trails near Wahoo, NE