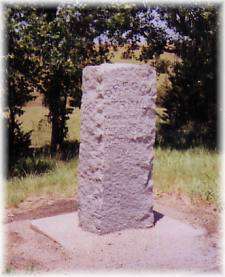 The Oregon Trail goes through Jefferson County in a nearly-diagonal pattern from southeast to northwest and almost follows the path of the Little Blue River, always remaining to the north of the river. Visitors get the feel of the long-past days of wagon trains and settlers heading west by viewing the visible ruts. In many areas, distinct trail ruts are visible as a broad "swale" across a hilltop. Along the state and county roadsides, many trail markers exist to point the way and explain the local history.

"The Oregon Trail was perhaps the first route across the plains to the Pacific slope, being traveled many years before the old Santa Fe Trail. While the eastern terminus was St. Louis, the real starting-point by wagon was at Westport or Independence, Missouri as the journey to these points was by boat. As the travel grew in volume, Leavenworth, Atchison, St. Joseph and Nebraska City became, in turn, outfitting points in the North Platte County." (1.)

The earliest use of this natural pathway was as an Indian Trail. In 1829, William Sublette used the trail commercially, via pack train, to haul goods and supplies to the fur traders' rendezvous in the Rockies, ending at Pierre's Hole (Idaho).

The resources of the Great Northwest appealed not only to the trapper and trader but also to the agriculturist and rancher. Due to fears of the American residents living in the Oregon territory that England had intentions of forcibly adding that country to her domain, it was thought that sending many colonists would solve the situation. Lt. John C. Fremont was commissioned to find an official route from the Missouri River to the Oregon country. Fremont arrived at St. Louis on May 22, 1842 and fitted out with 28 men, 8 carts, mules, saddle horses and 4 oxen for food. Kit Carson was selected as the guide.

Both Fremont and Carson's names plus the date, June 22, 1842, appeared on a steep sandstone bluff about one-half mile south of the Rock Creek Station. Locally known as Quivera Park, this area was very popular until high water in the early 1970s undercut the bluff and the historic carvings sluffed off the bank to be lost. A photograph of the carvings was taken during the 1930s.

After Fremont's expedition, emigration settled and claimed the Oregon territory for America. The Gold Rush period of the late 1840s and early 1850s, marked a dramatic increase in trail traffic. Due to the traffic, Road Ranching became an important business along the trail through Jefferson County. This private enterprise encouraged freighters and stagecoach traffic along this route due to the road improvements and provisions available at the "ranches" or stations. For 18 months, the Pony Express carried the mail through Jefferson County, utilizing four stations enroute.

By the fall of 1866, the transcontinental railroad had reached the Platte River near Kearney, Nebraska, and traffic on the Oregon Trail through this area began to diminish, as travelers would go as far as possible by rail, then "fit out" for overland travel.

Visitors can follow the trail through the county with help from maps available from the Fairbury Chamber of Commerce: Box 274, Fairbury, NE or : 402-729-300.

Things to do Historic Trails near Fairbury, NE