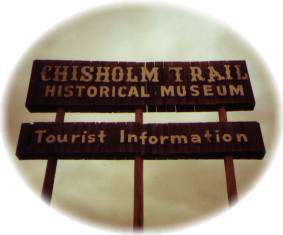 In addition, the museum provides a glimpse into the early days of the Waurika Community. The Beginning of an Industry - At the close of the Civil War in 1865, the greatest economic asset of Texas rested in vast hers of half-wild longhorn cattle. Locally, a longhorn was worth about $3 to $5, but in the cities of the North and East, the same steer would sell for $35 to $40. Economic conditions were right, but transportation was a problem. No railroads connected Texas to the East, and steamships were unsuitable for shipping the half-wild cattle.

In an effort to market the cattle, TEXANS BEGAN DRIVING THEIR HERDS THROUGH THE EASTERN PARTS OF INDIAN Territory to shipping points in Missouri and eastern Kansas. This route proved unsatisfactory primarily because farmers along this passage, know as the Shawnee Trail, feared the loss of their livestock to "Texas fever," a disease transmitted by ticks carried on the Texas cattle. In an effort to stop Texas cattle from entering the area strict laws were passed to limit importation.

The Cowtown - Joseph McCoy, an Illinois cattle dealer, realized that the problem of transportation could be solved by establishing a cattle trading center west of the line of settlement. In 1867, McCoy choose as the site of his venture the small prairie town of Abilene, Kansas, located on the Kansas Pacific Railroad. At Abilene McCoy constructed loading pens for the cattle and lodgings for the cattlemen. He then sent word that he would purchase all the Texas cattle that could be driven north.

The Trail - The Texans chose as the shortest and easiest route to Abilene a military trail first opened by the Delaware scout, Black Beaver, in 1861. This trail was also used as a trade route by the mixed-blood Cherokee trader, Jesse Chisholm. Although not a cattleman, Chisholm became a well-known figure on the trail and eventually the route north became known as "Chisholm Trail." Roughly paralleling the later route of U.S. Highway 81, the Chisholm Trail entered the Indian Territory near the present-day town of Terral, Oklahoma. It then passed through the future townsites of Duncan, Chickasha, El Reno, Kingfisher, Hennessey, and Enid before entering Kansas near Medford. The trail was not exact as the drovers often varied the route to avoid swollen streams or take advantage of good grazing.

As word of the new trail spread among the Texas cattlemen its use increased. In 1867, the first year the trail was used, McCoy shipped 35,000 head of cattle from Abilene. The next year the number increased to 75,000. By the late 1880s an estimated 3 million cattle had been driven from Texas to the cowtowns of Kansas.


Come visit us in Waurika, Oklahoma

The Rock Island Depot in Waurika has been restored for use as the public library. Come visit this historic structure that is part of the history of the only county seat on the 98

The history of the Chisholm Trail is more than the story of range-tough cowboys, stampeding cattle, and rowdy cowtowns. It is also the story of a people successfully adapting to the political, social, and economic changes brought on by our nation'

We currently do not have any events for Waurika, Oklahoma in our database. If you know of events taking place, please add the event
.

Things to do Museums near Waurika, OK