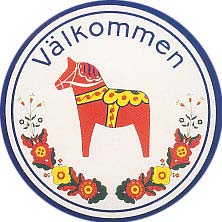 Oakland is known by its proclamation from the Swedish Counsel General and Nebraska Governor as the "Swedish Capital of Nebraska." It was named after John Oak and his wife, Inger Askwig Oak, who were among a band of 23 pioneers who struggled into Tekamah from Ottawa, a settlement in LaSalle County, Iowa, in July 1855. John Oak homesteaded land in the Silver Creek township north of Tekamah. By 1866, John Oak and his family moved to western Burt County and assisted five families to locate homesteads in this beautiful rich Logan Creek Valley as they became became the founding pioneers of Oakland.

Churches played an important part in the development of the community. Lutheran and Baptist congregations were organized in 1869, followed by the Covenants, Methodists and later the Free Mission churches.

By 1879, it was certain the railroad would be built through Oakland, and public spirited people subscribed to a fund for purchase of the present townsite. Stimulated by the coming of the first railroad, Oakland was incorporated as a village on April 13, 1881. In 1900, the Chicago, Burlington and Quincy Railroads were built to Oakland. Today, Oakland is located on the main line of the Burlington Northern Santa Fe Railroad.

Oakland established one of the first golf courses in northeast Nebraska in 1924. The sand green course was converted to grass greens in the late 1940s and expanded to an 18-hole country club in 1993. The Oakland Golf Course draws members from a 50-mile radius. Oakland/Craig girls and boys golf teams, along with boys teams from Lyons/Decatur, use the facility as their home course.

Oakland has exhibited great stability with many businesses over 100 years old, such as Holmquist Lumber, the Oakland Independent, and 1st National Bank N.E. Oakland continues to build on its strong foundation with its bi-annual Swedish Festival in June, one of Nebraska's and the midwest's outstanding ethnic festivals.

Hunter-gatherers of the Early Archaic period intermittently reoccupied a campsite on a now deeply buried terrace of Logan Creek located southwest of Oakland. Archeological excavations revealed successive layers, each representing a reoccupation of the site. The site dates 6000-4000

Oakland Golf Course is a beautiful 18

Opened in 1987, Troll Stroll has become one of Nebraska's most unique and charming tourism attractions. A one-of-a-kind nature walk, found nowhere but in the Midwest, the Troll Stroll features a scenic 3/4

To Oakland calendar of events

Things to do near Oakland, NE