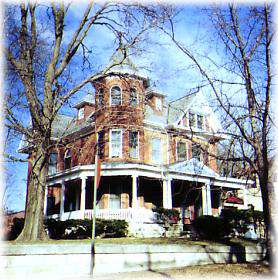 [Pusch-Randell-Anderson Home] Just east of the Historic Koester Block is one of Marysville's finest houses, the F.S. "Bud" Anderson home.

Built in 1904 by Robert and Jacob Wullschleger, Swiss brothers who immigrated to Marshall County, for Charles F. Pusch, a German immigrant who owned a cigar manufacturing plant here.

The brick-faced Queen Anne house was in the Pusch family until 1930, when it was sold to Dr. and Mrs. J.W. Randell.

One of the Randell's daughters, Bernice Randell Anderson, and her husband moved here from Salem, Indiana after they retired and took up permanent residence in the historic home. Mrs. Anderson, who died in 1985, was instrumental in getting the house listed on the National Register.

The home is a private residence.