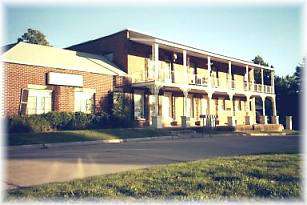 An area in the north section of Claremore was once known as RADIUM TOWN. George Eaton owned the first oil company in town. In 1903, he was drilling east of town for oil or gas. Instead, he found a "rotten-egg-smelling" water. Dr. W.G. Williams had the water analyzed for medical use and then marketed it as a cure. Bath houses were built and "radium water" baths became Claremore's biggest industry. The bath houses are now closed, and the area is in a stage of disrepair. The wells remain and are just waiting for the right investors to take up the dream of better health through the magical cure of mineral water.

To drive to this area of town be on Blue Starr Drive, to Dorothy Street (one block past Sioux). When Dorothy Street splits, stay right, and you will be on Seminole. When you get to 9th Street, turn left (east).

From 9th Street, turn right on Lavira to the KELLER BATH HOUSE, listed on the National Register of Historic Places. The two-story brick bath house has beautiful ornate wrought iron trim and was built in the 1900's. Once called the Mendenhall Bath, House, one could get a radium water bath for 25˘.

Things to do Historic Buildings near Claremore, OK