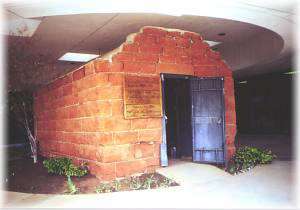 Built in 1908, the red rock records vault survived the courthouse fire in 1916. Outlaws were responsible for setting the fire at the courthouse in order to burn evidence. Little did they know that within the courthouse the original construction included a thick, red rock vault to protect valuable documents from such disasters or criminal acts!

Outside viewing at any time, but come by during business hours to view the "Washita" sculpture and rare photographs inside the courthouse.


Address: Located at the entrance to the Roger Mills County Courthouse.


Come visit us in Cheyenne, Oklahoma

Black Kettle National Grassland covers about 32,000 acres in western Oklahoma and 2,000 acres in Texas and is home to deer, turkey, and quail hunting.

To Cheyenne calendar of events

Things to do Historic Buildings near Cheyenne, OK