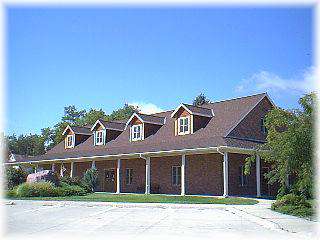 Kavan Log House - Built in 1873 by Frantisek and Terezie Kavan, this one-room home was made of logs held together by chinking made of clay mud and grass and dovetail notches. A second story room, which was reached by a ladder on the outside of the home, was used to store grain. District 42 Schoolhouse - The district was organized in 1878, but this building dates back to the 1890s. Classes were discontinued in 1970, with the district disbanding in 1973.

Weston Presbyterian Church - Much of the woodwork in this church is from the original building of 1889. Built for use by a Methodist Episcopal congregation in 1889, it was later sold to the Presbyterians in 1920. From 1920-1948, all services were performed in Czech. Wahoo Burlington Depot - The first train stopped at the depot in 1887, one year after it was built. The two-story building includes a waiting area for travelers and a home for the depot agent. Use of the depot was discontinued in 1973. Burlington Northern Railroad donated the building to the Museum in 1974. It is listed on the National Register of Historic Places.

Caboose - This caboose, built in the 1920s by the Santa Fe Railroad, is made of steel, and includes a stove, beds for the brakeman, and a desk for the conductor.