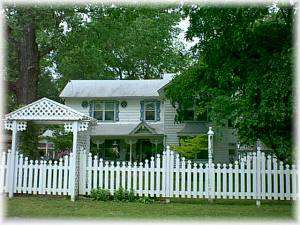 Built about 1900 by an early merchant, the home was originally located a number of feet east of its present location. When the town was platted and streets laid out in 1905, the house sat in the street. The home was purchased about 1910 by Dr. J.J. Fraley, an early physician.

In the 1980s, the home was acquired by Mrs. Fraley's great niece and has gradually been renovated and landscaped.

The residence is not open to the public, but the personality expressed in the house and landscaping is delightful to view. Dr. Fraley's "shingle" can still be seen swinging at the front gate - "Dr. J.J. Fraley, Physician and Surgeon."

Things to do Historic Homes near Hominy, OK