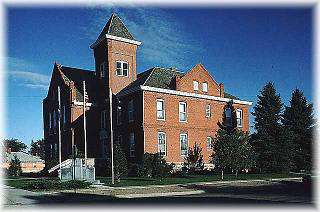 Organized in 1885, Sheridan County named Rushville as its county seat in 1888. The county initially rented office space. In February 1904 the county board received a petition calling for a special tax to build a courthouse. Sheridan County officials built as costly and elaborate a courthouse as they could afford; it was completed in 1904.