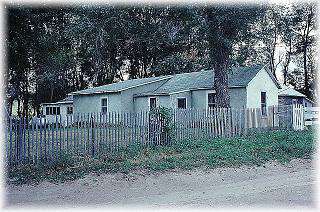 Spade Ranch is located in the Sandhills of northwestern Nebraska on a tract of land in Sheridan and Cherry counties. Listed on the National Register of Historic Places, the ranch includes numerous buildings and structures, including the log cookhouse built in 1879, bunk houses which were used by the hired hands; the 1889 horse barn; calving sheds; breaking pens; and various corral areas.


Bartlett Richards purchased the Spade Ranch from Bennett Irwin in 1888. Richards and Will Comstock, also involved in many of the ranch's affairs, were instrumental in recognizing the importance of the Sandhills a grazing land. When Teddy Roosevelt targeted western ranches for illegal fences and claims, the Spade Ranch was high on his list. Because of Richards' conviction for illegal fencing of public lands and because of his untimely death while serving a jail sentence, the vast Spade "empire" has become legend in the history of cattle ranching in the Great Plains region.