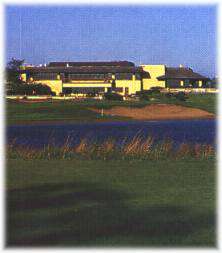 There's a reason for the name of Southwind Country Club. The course was opened in 1980 with one over-riding factor in mind: in southwest Kansas, the wind blows from the south, often and hard! Taking that into account, the course was laid out in the rolling sandhills south of Garden City to take advantage of the wind. It worked.

Southwind as a private club is reciprocal with various other private clubs and has become a favorite among touring golf professionals. (Please call two days in advance for tee times.) Every year it's one of the two sites for the Southwest Kansas Pro-Am Tournament, one of the largest professional events in Kansas. The purse exceeds $70,000. (The other site is Buffalo Dunes).

Longtime PGA veteran Tom Weiskopf is plenty impressed by Southwind. On a trip to southwest Kansas, Weiskopf toured the course -- and he loved it! As a matter of fact, he liked the course so well that he returned that summer to compete in the Pro-Am. His reasoning was simple:

"It has an amazing resemblance to the Scottish Dune Country."

Southwind isn't just for golfers. It has an oversized pool for the whole family to enjoy. You may also choose between formal or casual dining as well as a patio grill.

Things to do Golf Courses near Garden City, KS