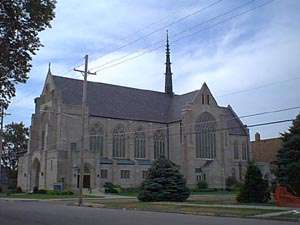 
St. Mary's Cathedral is one of the finest Late Gothic Revival churches in the state, constructed in 1926-28 to the designs of architects Henry W. Brinkman and J. Stanley Hagan of Emporia, Kansas. The large Indiana Bedford sandstone church is a scaled down model of the Parisian Cathedral La Saninte Chapelle. The main altar and four smaller altars are made of white Italian marble. The "Rose Window" at the back of the cathedral came from Italy in its completed form.