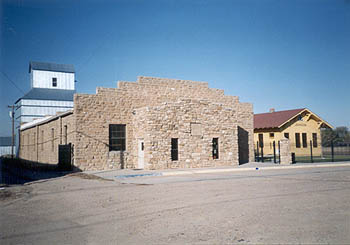 The Stanton County Museum gives a glimpse of the past and fascinating look at the history of Stanton County. There are nine buildings on the museum site and each has a special story to tell about the residents and the proud pioneer history of this county.

1. The main building of the museum complex is built of native stone. Originally constructed as a shop for the road department, the building was built in 1935 as a WPA project.

2. The Santa Fe Depot was constructed in 1923. It was sold at auction 60 years later and purchased

by Alfred Ramsay and donated to the museum. The depot houses railroad memorabilia including a small collection of 1930\'s Santa Fe calendars.

3. The decommissioned Santa Fe caboose has been repainted inside and is set up similar to what it would have been like for the train crew who used it as working and living quarters.

4. The Vosburg ironclad elevator was constructed in 1928. As the largest elevator in Johnson, it had a capacity of 15,000 bushels of grain. Most grain trucks of that era held only 60 bushels. The elevator was moved from its location on the railroad tracks to the museum site in 1994.

5. The scale house that accompanies the elevator features weighing equipment and other artifacts necessary for operation. A second room in the scale house is a bunkhouse room with cowboys and farmhand artifacts.

6. The reconstructed jail houses the county\'s original double jail cell with attached corridor, and tells the story of the progress of law enforcement in Stanton County.

7. The Ray Scott building was moved from its location just off Main Street. It has the original pressed tin ceiling and wall. It houses the museum\'s collection of transportation and tractors, along with automotive tools and accessories.

9. The old general store building has been home to a variety of businesses and still contains original counters of Tucker\'s general store.

We currently do not have any events for Johnson City, Kansas in our database. If you know of events taking place, please add the event
.

Things to do Museums near Johnson City, KS