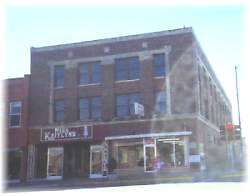 It is considered a neo-Egyptian architectural style, partly because of the columns found at the doorway near the west end of the north front. It is a radical departure from the Victorian architecture dominating the Perry business district. Besides the two retail firms housed on the main floor, the second floor contains office space, though none are presently occupied. A spacious lodge hall on the east half of the third floor is unused. A two-level auditorium originally located on the second and third levels of the west half has been converted into office space, also unoccupied. Former Governor Henry S. Johnston of Perry was grand worshipful master of Oklahoma Masonry when the building was dedicated in 1924.


Address: 327 N. 7th Street, north corner of the west side of the courthouse square.