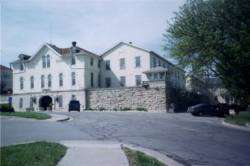 The "DB," as it is known, was established as a military prison in 1873. The buildings inside date from 1863 to 1964. The DB is the only military maximum security facility.

This USDB closed in 2003 and the inmates were moved to the new USDB on the west side of the fort. The 'castle' portion in the center of this facility has been removed. The other buildings, walls, grounds and towers remain and have been converted into office spaces and parking areas.

Things to do Historic Buildings near Fort Leavenworth, KS

The WPA Beach House at Gardner Lake is listed on the National Register of Historic Places....