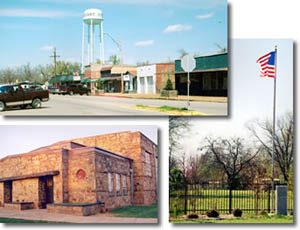 The face of Valliant has changed over time but you can still see glimpses of the years gone by. Families come and go but many remain to raise generations of children. Valliant has a hometown atmosphere that doesn't age as time goes by. It is a place to come back and remember the past.

The mild year round climate affords the outdoor enthusiast the opportunity to take advantage of many activities. An annual rain fall of 50 inches and an average temperature of 60 degrees makes for pleasant days with abundant sunshine. Lush forests surround the landscape as a variety of hard wood trees make for a rich mix of color in the fall and shade in the summer. Lakes and rivers are plentiful for fishing, hunting and watersports.

The land that Valliant is on was originally designated as Indian land and was part of the Choctaw Nation.

In 1904 the town was incorporated and the first mayor, Ransom Turley, was elected. A cotton gin was built in 1903 and flourished until the cotton market declined.

During the 1930's Valliant had numerous Works Progress Administration (WPA) and National Youth Association (NYA) projects. One of these was the brick high school, gymnasium and shop building. The old rock gymnasium remains to this day.

In the 1960's the Pine Creek Dam was built to control flooding. This brought new families to town and the lake draws people to the area for recreational activities.

The Weyerhaeuser Paper Mill, built in 1970 and the largest in the world at that time, brought jobs and prosperity to the Valliant area.

To Valliant calendar of events

Things to do near Valliant, OK

This is just to remind you that fishing reports are given with the best intentions to help you catch fish. And do remember fi...

Also referred to as the Magnolia Mansion, this colonial mansion is listed on the National Register of Historic Places....