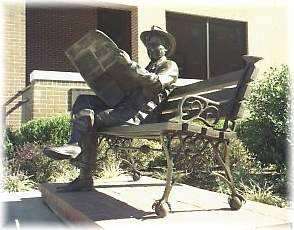 In the middle of the 300 block of Will Rogers Blvd., you will want to stop, grab your camera and visit the life-size bronze statue of Will Rogers, sitting on a park bench reading the Claremore Progress. The Rogers County Historical Society presented this statue, "All I Know is What I Read in the Papers," to the City of Claremore in 1996. The Life of Will Rogers is being presented in the form of statues to be placed throughout the city. Take a seat and have your picture taken alongside Will!

Things to do Arts near Claremore, OK