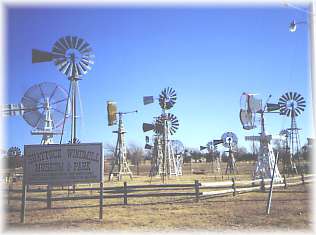 Shattuck Windmill Museum and Park was established in 1994 and now, 37 windmills stand in the park, with no two alike, from a little 5 foot "Star Zephyr" to the big 18 foot "Samson." Some are solid wooden wheels, others have wooden wheels that fold and many are unusual steel mills - all are in pumping order and have lifted water from beneath the earth to provide water for a homesteader's garden or a rancher's cattle.

These mills, some of which have truly heart-beating stories, are the reason for the Park. Without windmills, barb-wire and the railroads, it seems that these High Plains would not have been settled as early as they were.

In 1854, Daniel Halladay patented his Halladay Standard windmill and then exhibited it at the New York State Fair where it was "awarded the highest Premium ... for the most valuable newly invented machine for the farmer."

Now, nearly a hundred and fifty years later, windmills still run without stopping day and night in an arid region far from the home of the original inventor.

Also, on the grounds see a furnished half-dugout "soddy", a pioneer home, and memorial wall.

We currently do not have any events for Shattuck, Oklahoma in our database. If you know of events taking place, please add the event
.

Things to do Museums near Shattuck, OK