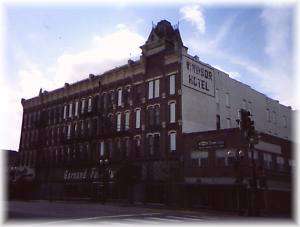 The most remarkable feature of the hotel is an interior court in the center of the mezzanine, with a full length skylight at its vaulted ceiling. Balconies of carved mahogany balustrades surround the court on three sides. In April of 1972, the Windsor was placed on the National Register of Historic Places. It was closed as a hotel in 1977.

Hours: Due to renovation efforts tours are unavailable at this time
Address: Main and Pine
Phone: 620-272-3664
Our Email: fico.historical@gcnet.com

Things to do Historic Hotels near Garden City, KS