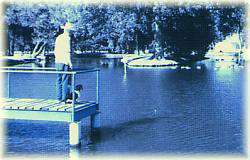 Things to do Recreation near Ellinwood, KS

Veteran's Memorail Park is 74 acres of recreation with a fishing lake, ball fields, tennis and basketball courts, a sand voll...