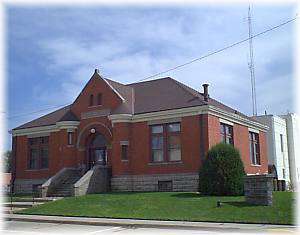 Constructed in 1901-02 in York, the library is a fine
example of educational architecture. Designed by
Marrison H. Vail, the building incorporates elements
of the Romanesque Revival-style of architecture. The
York Public Library represents one of a small
number of libraries built in the state prior to, and
without Andrew Carnegie funding. Mrs. Lydia
Woods, a local citizen, donated monies to build the
facility, the first permanent home for the library since
its early beginnings in the 1880s. Listed on the National Register of Historic Places, the building is now
occupied by professional services.