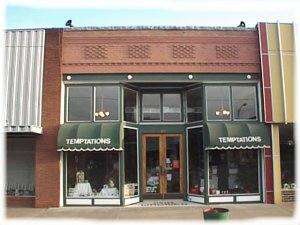 While you are strolling the streets and enjoying history you may like to stop by Temptations and see what is in store for you. In 1986 new owners purchased the building and wanted to stay within the era of our prairie architect. They did just that. They uncovered a ghost sign on the wall. It reads: Selling Hardware, Furniture and Undertaking Goods--W. H. Munger. This was a real surprise. They redid the windows and the front entrance to the store that was true to that period. After the completion they finished the project by adding awnings for protection and appearance.