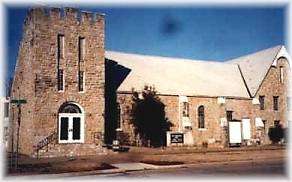 The Christ Presbyterian Church was purchased from the First United Methodist Church in 1990. In 1882, a one-room frame building was constructed after $500 was given by the Methodist General Conference to erect a house of worship.

The church was served by "Circuit Rider" preachers until 1907. Through the years, additions were made to the oneroom structure. A ground-breaking ceremony was held in 1939 for the stone building, and the frame structure was removed. The educational building was added in 1967.