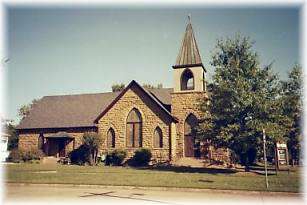 In the 1950's and 1960's, three changes were made. The original gothic tracery windows were replaced with stained glass windows, a 40' x 40' social and educational wing was added to the southeast side of the structure and a bell tower was placed atop the stone tower. In spite of the additions, it is one of the oldest religious structures in northeastern Oklahoma that has retained its original appearance.