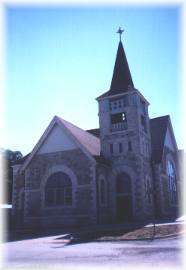 The Congregational Church was Built in Gothic style of architecture in 1888 of Greenwood County limestone. The bell in the tower originally hung in the bell tower of the Congregational Southern Kansas Academy that stood where the present day Greenwood County Hospital stands. Money to purchase the bell was raised by donations from the county school children. Each child contributing $.10 or more received a certificate representing one share of the bell. It was placed in the church tower after the academy was razed in 1919. The church underwent renovation in 1986 after it had merged with the First Christian Church. In 1989 the Christian Congregational Church was entered on the Register of Historic Kansas Places.


Come visit us in Eureka, Kansas

Things to do Historic Churches near Eureka, KS