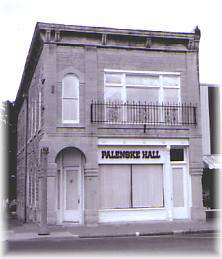 A.E. Forinash was a master craftsman, stone mason and cabinetmaker. He was one of the stone masons who did much of the stone work on this building. This fine stone building was at one time a bawdy saloon of the early days and then served as a formal, dignified bank. The large arched wine cellar beneath it is still preserved in its old, original state.