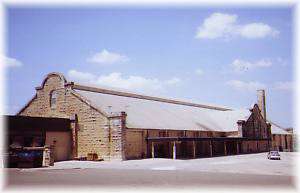 The building was named in honor of General James H. Polk who became the Chief of Tactics at the Ground General School, Fort Riley, following World War II.