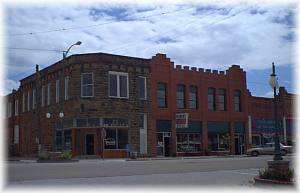 The adjoining store has held a variety of business. It has recently had its original tin ceiling restored and is now a gift shop.