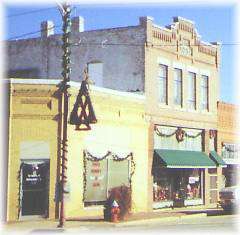 Mr. Rose built a two-story brick building in 1911. He owned and operated a hardware store on the ground level. The upstairs had several interesting businesses including a pool hall, photograph studio and dental offices. Watonga's first dentist was a woman that had her office upstairs. The Rose Building remained a hardware store until 1984. At this time the owner moved to another location causing the building to be vacant for several years.

The building now has a lovely historic building full of antiques. The owners welcome you to stop in and brose while in the area.