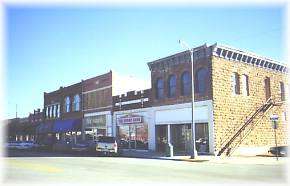 James Lobsitz founded the Famous Store in October of 1893 in a modest frame building a half a block east of the present building. His general merchandise business prospered and he erected the 50 by 90 foot two-story brick building in 1908. The second floor was home for the Masonic and Knights of Pythias lodges and attorney offices including Henry S. Johnston, one-time governor of Oklahoma. Fire gutted the building in July of 1931. It was one of the largest fires ever in the city limits. The building was completely remodeled and received a partial face-lifting in 1947. More remodeling was done in 1953.


Address: 626 Cedar Street, south side of the courthouse square.