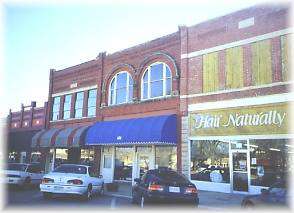 
Address: 614 Cedar Street, south side of the courthouse square.