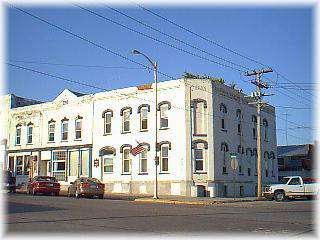 The Union Hotel was built in 1880 by Mr. Caesar Schaer. This was the same year that the first railroad came to Superior, and it was the town's first brick building. All the bricks were made locally at a brick plant near Fourth and Converse Streets. The hotel was noted for having running water powered by a windmill, virtually unknown in hotels west of Lincoln at that time.

Presently, the building is occupied by business offices.