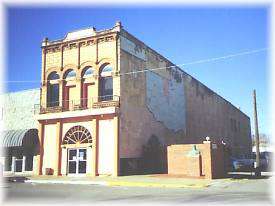 Originally the "Boston Store" built in 1894 and it was one of the first permanent buildings of stone on the square. Listed on the National Register of Historic Places, it was erected by Adolph Wolleson and A.C. Nicewander, both early day businessmen. Wolleson, a merchant sailor from Denmark is credited with influencing the building design using naval motifs. Gargoyle head and leaf figures accent the Romanesque arched windows. The first floor facade has been altered with stucco panels covering the original recessed entry store front.


Address: 615 Delaware Street, north side of the courthouse square.